Tatsu Aoki's Miyumi Project at MCA Jazz on the Veranda

A vastidão (ah vahs-tchee-DOWN): Somehow the Portuguese word (with its wide-open syllables and three-beat length) that expresses the concept of vastness resonates more directly with the spirit of the most recent concert at the Museum of Contemporary Art’s Tuesday on the Veranda series than the clipped-sounding English word. A vastidão, the expanse of the sextet: two tenor saxophones, one baritone sax, upright bass, taiko drums, three-congas percussion. A vastidão, the 360 degree view from the veranda seats: the sextet, the 2/3 height mark of full, green trees, and the honeycomb windows and decks of lakefront apartments to the North; a manicured green lawn lined with enormous white stone flower pots, the blur of Lake Shore Drive, then the pure blue lake and the shimmering horizon to the East; the speckled grey minimalist walls of the museum to the West; and stone steps cascading down toward Chicago Avenue behind, to the East.

The group arrived ready to meet the June breeze with the force of brass floating serpentine over four-note bass ostinatos. Taking a cue from the modal jazz pioneered by Miles Davis on his masterwork Kind of Blue, the Miyumi Project privileges melody and the hypnotic rhythmic phrase over the rapidly moving chord changes of be-bop. However, there the comparisons end. The two tenors and one baritone sax do not play medieval church modal scales as do the horns on the Miles’ work, but rather blossom their inventions within the traditional Western 8-note scale – with polytonal embellishments and extended techniques, to be sure – and with much reference to the pentatonic “blues” scale. Additionally, Aoki’s ensemble features a conga player and a percussionist on the martial Japanese taoki drums, a touch not found among the modal jazz groups.

The musicians played two sets of several pieces each and the musical/emotional range that was covered covered, also: a vastidão. Tatsu Aoki’s Miyumi Project, may hearken to modal jazz in its emphasis on melody and repeating bass lines, but its direct spiritual and aesthetic forbear is certainly the 1960’s work of Yusef Lateef. Lateef is the first jazz composer and arranger to blend Eastern music and instruments with a blues/jazz aesthetic. The opening track, “The Plum Blossom,” to his seminal work, Eastern Sounds (1961), sets the radical and hypnotic tone for the record, as the Afghani stringed rubab plays a steady pulse twang and Lateef states the melody and improvises on the Chinese clay xun pipe. Since Lateef, the East and West have continued to form sometimes intriguing and sometimes dubious hybrids in jazz (John Zorn’s Masada and Don Cherry’s work in the 1970’s are standouts in the realm) and Aoki’s Miyumi project clearly falls into the “intriguing” category, to which I would also add the describers bold, mesmerizing and joyful.

The ensemble’s front line of horns, Edward Wilkerson and Jeffrey Chan on tenor and Mwata Bowden on baritone sax, clarinet and diggery-doo -- constitutes a type of Chicago Brass Dream Team. Bowden, the elder statesman of the group, gaunt in a white tunic, stood in between the two younger players and anchored the trio with forceful and passionate blues-based lines that expanded into sky-climbing poetics before finally returning to the tonic note like a hawk soaring back down to its nest. Bowden’s vocabulary is ever-expanding and it was striking to hear his flexible New Orleans march-tinged lines syncopate with the often strict, Japanese martial rhythms pounded on the taoki drums by Amy Homma: a new pleasure for the ear.

Wilkerson played impressionistically. His tenor phrases often sounded as questions, which were then repeated, interrogated, investigated, and placed again into sonic space to see what further questions they may provoke. His lines veered from jagged to round, as abstraction and speed braked into cooler melodic statements. He came meditatively upon long individual notes which he let the audience savor as they peaked and decayed. He blew what my scribbled notes call “phosphorescent meltdown” and at times, when his melodic lines ascended and descended as a trick waterfall which falls, hits the sandy bottom, and suddenly bounds back upwards, Wilkerson even recalled the rapid-fire minimalist lines of composer Phillip Glass.

The youngest of the front line horn players, Jeffrey Chan, evoked the sweet and the melancholy in his playing and in this sense echoed Duke Ellington’s poetic sense. The breathiness and slowdown which emerged towards the end of some of Chan’s expertly chosen note-paths brought out Tuvan-like overtones compelling to the ear. When Bowden played, Chan often teamed up with fellow tenor Wilkerson to blow quick five-note statements in unison that recalled the punch-punch lines of Fela Kuti’s Afrobeat ensembles. The Brass Dream Team listened so well to each other that such call-and-response dialogue elevated the pieces into unexpected realms of intensity.

Tatsu Aoki is the ensemble leader, not only as he is responsible for the compositions, but also because it is the three, four or five note repeating figures that he plays which form the backbone of the group’s explorations. Elegant in a black cape draped over black pants and shirt, Aoki adroitly stated the bluesy bass lines and two-stepped lightly on his feet around his instrument. With Aoki’s architecture sketched, the ancient taiko drum patterns played by Amy Homma could enter the picture. As mesmerizing as the strict martial figures Homma played, were her movements: she would form an inclined T with her torso and arms and then revolve the sticks into the drums with dramatic stretches and swings. The ways in which Homma’s strict-time, non-syncopated percussion crosshatched with the African-based syncopations of Coco Elysses’ congas formed a sonic knot for the listener to try to undo as the night progressed. This, in fact, is the great ambitious gesture of the Miyumi Project: the attempt to mesh the upright, martial beats of the aoki percussion with the jazz musicians’ swing. It worked in a way that maintained a delicious tension throughout the evening.

The pieces sound as the architecture-inspired paintings of Roberto Matta appear. Visible are the lines of the dwelling, in the form of Aoki’s bass parts, while the instrumentation of the rest of the group drapes and swirls around as splashed light greens and bright whites -- in a way that is both free and yet totally cohesive. To sit in the echo of such living and pulsing structures is to feel as if one has entered a work by Matta – some dream.
Posted by Dan Hanrahan at 4:17 PM 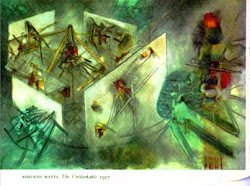 Dan Hanrahan
danhanrahan.net danhanrahan.bandcamp.com ** Dan Hanrahan is a writer, musician, translator & actor. His works include the albums "Three Waves" (2015) & "Radical Songs for Rough Times" (2018), the show for one actor and reedman, "Some Giants: An Homage to Avant-garde Jazz Composers" and the one-man shows,"Forget There's a World" and "Sermon of the Mouth."